How to avoid these 10 BIG mistakes on the court to increase your chances of winning matches: 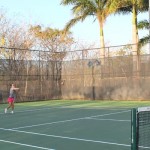 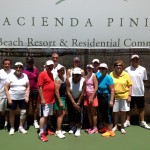 1.
DON’T: Don’t try to hit winners from behind the baseline.

DO: When behind the baseline, maintain rallies, keep the point going, and save the winners for when you are inside the baseline, when you get shorter balls.

2.
DON’T: Don’t hit your first serve with the same pace the entire match.

DO: Do change the pace of your first serves. When you practice serves, practice different spins (slice, flat, kick). Your opponent will get comfortable returning your serve if it’s the same every time. Give them different speeds, something to think about. On a big point, hit a conservative first serve so you get it in. If you’re up 5-1 and serving 40-15, you can afford to try a big first serve aiming at one of the lines, you have a “score cushion.” This takes me to our next point, always play the score …

3.
DON’T: Play every point regardless of the score.

DO: This is the most important point on this list! Always play the score. Your shots should not be the same if you are up 5-2, serving 40-0, versus if it’s 4-4, 40-40. Keep the ball in at all costs on big points (make your opponent beat you, don’t shoot yourself in the foot!); and attempt to go for bigger, riskier shots when you have some “score cushion.”

4.
DON’T: Don’t try to put away overheads when you are behind the service line.

DO: If you are behind the service line and get an overhead, either let it bounce, or hit a comfort shot. Don’t go for broke on a big shot as most likely, you will miss it. Overheads are easier to hit from inside the service line, your angle will be better, it’s an easier shot to make.

5.
DON’T: Don’t be unaware of weather conditions and surface you’re playing on.

DO: Do pay close attention to weather conditions. This one is huge and many players don’t modify their game based on weather and playing surface during matches. We could talk forever about this point, but here are some short tips: when you are playing indoors, conditions are controlled (no wind, no sun, etc.), so it’s good to hit your strokes and serve with a bit more pace as no external conditions will have an effect on the ball. Balls will travel faster, which will be tougher on both you and your opponent. Shorter points are generally the norm indoors. On clay, it’s all about patience and stamina. Clay slows down the ball after the bounce, so be prepared for longer rallies. The player that is most patient, moves better, has more top spin and has a better physical condition will generally win on clay, especially in singles. On outdoor hard court, balls will travel faster than on clay; points will be shorter, but not as short as indoors. Being a bit more aggressive on outdoor hard is recommended, although patience is good on this surface too as the wind and sun will have an effect on the ball and it might be a bit less predictable where the ball will travel. On all surfaces, with wind, the golden rule is keeping the ball in. It’s tough to go for the lines or hit many winners when it’s windy, so keeping balls in is key. Hitting balls down the middle is good. Remember that the net is 6 inches lower in the middle (versus the sides of the net), so hitting balls crosscourt that go over the middle of the net is playing high percentage tennis, especially during windy conditions. Another factor to take into account related to wind, is knowing the wind’s direction. Modify your strokes when the wind is on your back, versus against you. When wind is on your back you don’t need to hit so hard, as balls will fly out of the court easily. Topspin is especially useful when wind is in your favor. When against wind, you can afford to hit it harder as you will have more cushion for the ball to stay in. The last point is sun. Make sure when you practice serves, that you know how to serve with the sun in front of you (you don’t want any surprises in matches!). A lower toss is recommended, also tossing to different angles, so that you don’t toss it straight into the sun which will blind you for several seconds after hitting it (the point could be over in several seconds!)

DO: Do keep the length of your volley the same on these high volleys, and put your body weight behind your volley, so that the arm is not moving forward by itself, but rather your whole body is.

7.
DON’T: Don’t attempt drop shots when you are behind the baseline (unless you are Roger Federer, this is a low percentage shot!).

DO: Do give balls a chance to go in; if you’re going to miss, miss long. If you hit a ball in the net, you never gave it a chance to go in the court. Misses are never good, but if you are going to miss, better to miss a bit long or wide than at the net. This is also much easier to correct. That’s why currently top spin is the name of the game. A big reason why Spaniards dominate the game today (10 of the top 50 players in the world are from Spain), is that they consistently hit a yard or more over the net, they basically take the net out of the equation.

DO: Do play the game and shots that you are most comfortable with. Go for percentages. If you can make crosscourt forehands in your sleep, then that’s a shot you should use a lot in matches. If you’re great at hitting spin serves out wide on both service boxes, then use them often. Play matches with the shot and game plan you are comfortable with, and don’t change it unless you are getting your butt kicked. This brings us to our last point; most matches where the players are even, come down to which player or team can focus better on the key points …

DO: Do focus on EVERY point. Every point in a tennis match is huge, from the first to the last. Sets can be very short, or long. If there are no deuces, it only takes 24 points to win a set. That’s nothing! We are all very privileged to be playing this great game of tennis, let’s make it count! Focus on every point you play and when you practice. It’s better to practice for 45 minutes well focused, than for 2 hours without knowing what you want to accomplish. Set realistic goals for yourself, and focus on accomplishing them. No matter what level you are, every time you step on a court, that is your tennis legacy. In leagues especially, players talk a lot about other players. It’s nice when you are known as the player that never quits on a point and gets everything back. That good reputation gives you an edge even before you step on the court to play future matches. At the pro level, the masters at this are Rafael Nadal and Serena Williams. Who wants to play against them? No one! Because they are known for being tough as nails, they never quit, and every match seems to be a life or death matter to them.

DO: Be prepared before a match, your equipment needs to be in perfect condition. Make sure your equipment is good to go, your racquets are well strung, you have towels, extra over grips, enough water, basically anything you need so that you never have to say, I lost a match because my strings were too loose, did not have any over grips, etc. Losing a match due to anything related to equipment, is your responsibility and could have been avoided. It’s hard enough to focus well during a match, don’t add equipment to your list of worries!